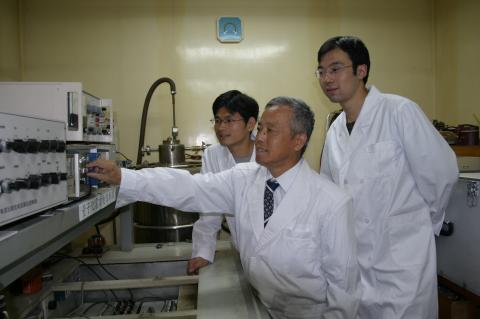 Zhang Zhonghua, researcher of NIM, academician of the Chinese Academy of Engineering,  expert in precise electromagnetic measurement and metrology. He was born on July 2, 1940 in Suzhou, Jiangsu Province. In 1957, he was admitted to the Department of Engineering Physics of Tsinghua University. After he completed his postgraduate studies from the Department of Electrical Engineering of Tsinghua University, he has been engaged in the precise electrical measurement work at NIM. In 1995, he was elected as an academician of the Chinese Academy of Engineering.

From 1983 to 1988, he was responsible for the research work regarding "the establishment of the standard for superconducting strong magnetic field", and the results reached the international advanced level. In 1992, the results of this issue won the second prize of National Science and Technology Progress Award.

Since 1987, he has been responsible for the research of the project "Quantum Hall Resistance Standard", and developed the electromagnetic field calculation method in Hall samples with arbitrary cross-section shapes for the first time in the world. In 2007, the project "Quantum Hall Resistance Standard" won the first prize of the National Science and Technology Progress Award , and was approved to be put into use by the former General Administration of Quality Supervision, Inspection and Quarantine on January 1, 2008, replacing the physical standard and becoming the national primary standard of China.

In 2006, in response to the major change in the international system of units, namely redefining kilogram with fundamental physical constants, Mr. Zhang proposed the joule balance solution with China’s independent property rights, which was highly valued by peers in the international metrology community.

As a well-known expert in the field of metrology, Mr. Zhang has also personally directed a number of doctor students from Tsinghua University and Harbin Institute of Technology to do his best to train the talents and the new force of metrology research.